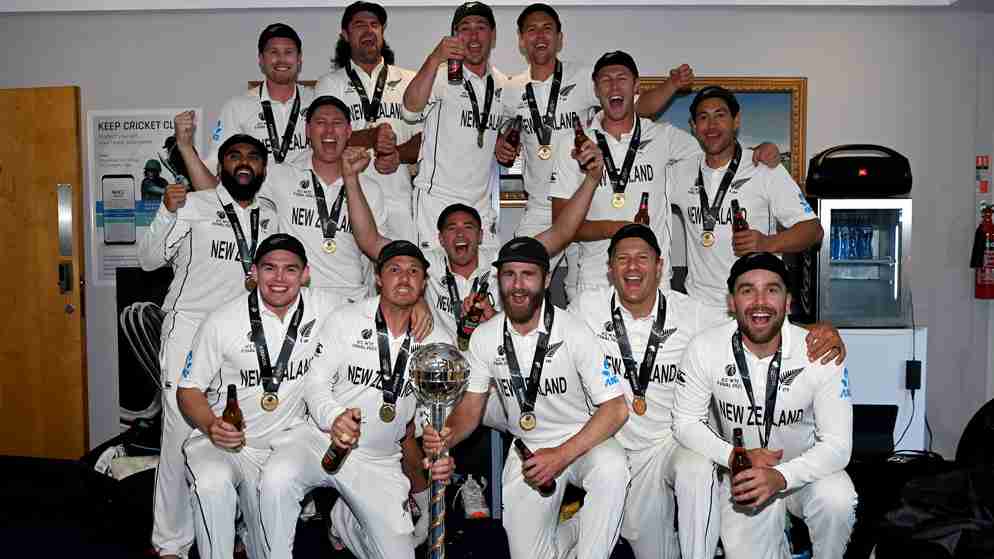 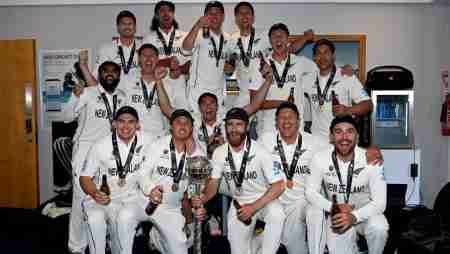 The marquee event came to an end with New Zealand lifting the inaugural World Test Championship title. Following their heartbreak two years prior to the Test series, New Zealand emerged victorious on their return to English soil. After the nerve-shredding final hours of the series, Kane Williamson’s men triumphed over the eight-wicket win over India.

The first major win for the Black Caps was followed by their loss in the 2015 World Cup final to Australia and the 2019 ODI World Cup to England. We can all agree the sixth day was the most intense of them all. Everyone glued to their seats, cussing and fussing over the missed opportunities and cheering on as beautifully essayed shots.

As the rain cleared on the reserve day, the sun beamed over Williamson and his men as they lifted the silverware they rightfully deserve. The team displayed modest gameplay encompassing unwavering teamwork throughout.

The sixth day began with India on the lead with 32 runs ahead, on 64/2 with all sorts of outcomes or a twist still lingering with possibilities. As Virat Kohli and Cheteshwar Pujara on the crease waiting impatiently to score as many runs as possible. In these hours, the soon-to-be winner knew they needed more wickets, and the team got on to a splendid start with Kyle Jamieson.

The tallest, fastest bowlers strike Kohli as BJ Watling grabs it behind the stump. And the game began with Kiwi bowler striking again, tempting Cheteshwar Pujara to get on the brim, as Taylor gratefully caught it on the cordon.

This meant a considerable downfall for Indians with two wickets down, just in the initial eight runs. Nonetheless, Jamieson’s back-to-back scalp brought Rishabh Pant on boards. For a while, the rigorous partnership Ajinkya Rahane gave the wicketkeeper-batter an edge over New Zealand, taking India way past 100.

Although right before interval Rahane struck out, India was batting away with the leads of 98 on the scoreboard as 130/5. Once the game resumed, New Zealand was back with full speed as the crowd cheered for Henry Nicholls. This time, no one could deny the team the glory they earned with every marvelous catch and strike but one at a time. Slowly yet steadily taking the climb off, finally transitioning on the steadfast ascent to the summit.

Two balls later, Ashwin fell. Now the hopes of India weighing on Mohammed Shami’s shoulders for quick target runs. In the scoreboard, the needed run-chase has already sneaked up to 2.5. But the figments of expectations were short-lived just after three boundaries. Shami fell against Tim Southee’s fierce attack. And in no time, Jasprit Burmah’s play also came. That too, without having scored any for the team in the same over.

India came on short on the best condition for the batting session. Hence, now India needed wickets. Although India was to a decent start with two wickets off by Senior off-spinner Ashwin. However, it simply wasn’t their riches to grasp this time. The gameplay was off the charts as two phenomenal batters destroyed them with one patient shot at a time.

As Williamson and Taylor stood tall on the crease, rolling out runs and amplifying the scoring rate. By the second of the match, Williamson had already landed half a century. Now the winning scores were rested on Talyor, the former captain’s robust gameplay. And just like that, he delivered no shortcomings on the way carefully played balls one after another.

It was clear at one point India was in pursuit of a draw. But New Zealand rebuffed this slightest idea by claiming their supremacy over the game and taking the title home.

As for Kohli, the captain of India, this will be the third fail on any such significant events. After a devastating loss in the 2017 Champions Trophy and the 2019 World Cup. His only hope seems to be the T20 world cup this year. Which possibly will decide his hierarchy in the team. It was the day the poor captaincy cost India a trophy.

It was not a stroke of luck as the broadcast announced New Zealand had a 27% chance of winning. However, Williamson spell turning golden bowling average knock down the outstanding batting line-up. Although considered young by the New Zealand standards shamefully destroyed the opponents in the first eight tests. A too good to be a true, tall cricketer with a lethal swing who can hit sixes.

With this title on hand, New Zealand is more than cricket’s second favorite. They are winners and the very best who gave us an entertaining match that stirred our senses.