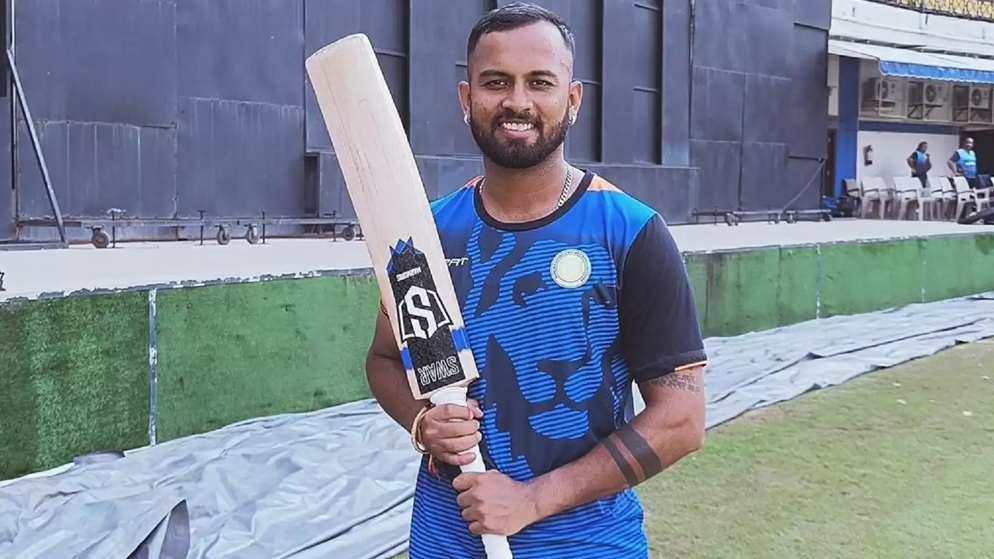 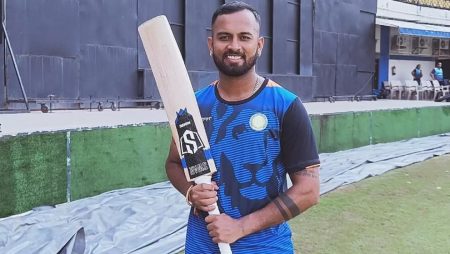 Cricket is one of the most popular sports in India, and this land produces several legendary players. Among many players, Samarth Vyas is a brilliant former cricketer from India. He is famous as the name of SB Vyas. He belongs to Saurashtra and managed to grab the headlines amidst the Twenty 20 World Cup 2022 final excitement. Moreover, he joins Sachin Tendulkar, Virender Sehwag, and Rohit Sharma, among others, in a landmark batting achievement. Luckily, he becomes the 8th Indian batter to register his name in the list of double a hundred players. He gets to the milestone in the ongoing Vijay Hazare Trophy 2022.

Who is Samarth Vyas?

He is an aggressive right-handed batter who belongs to Saurashtra. Samarth Vyas was born on 28th November 1995 in Rajkot. He represented the state at the under-16 and under-19 levels before playing first-class List A and T20 teams. However, he still fails to make an impact in first-class cricket. He scores 271 runs with a strike rate of 16.93 from 10 matches. List a numbers of Vyas, following his double hundred. His score becomes 1183 runs at 45.5 with a strike rate of 95.86 with three hundred.

Players who achieve the Landmark of Double Hundred:

There are just eight Indian players who achieve the landmark of double a hundred. Now, Samarth Vyas joins these legendary players. However, Vyas joins Sachin Tendulkar, Virender Sehwag, Shikhar Dhawan, Prithvi Shaw, Virendar Sehwag Rohit Sharma, Sanju Samson, and Yashasvi Jaiswal in a select list of Indian batters to have registered List “A” double hundreds. In addition, Vyas become the 4th to achieve this milestone in the Vijay Hazare trophy. Keep in mind that Shaw, Samson, and Jaiswal score double centuries in Vijay Hazare Trophy before him.

Moreover, he was also the 5th highest run scorer at the Syed Mushtaq Ali Trophy 2022 earlier this season. He scores 314 runs at 52.33 with the most impressive strike rate of 177.4. Vyas score two fifties from seven innings of the Syed Mushtaq Ali Trophy. Overall, he aggregated 649 T20 runs at 29.50 and a strike rate of 150.58.Vyas score 200 runs at just 131 balls for the Jaydev Unadkat-led Saurashtra against Manipur in an elite group a match.

This match was played at the Jamia Millia Cricket Ground, Delhi, on 13th November Sunday. In addition, he scores 282 runs in 36.3 overs along with other openers, Harvik Desai. He also adds 100 runs in just 107 balls in the team total. Vyas made his double hundred with 20 fours and nine sixes. In this way, Saurashtra gave 397 runs target to Manipur in the allotted 50 overs. Manipur scored 115 runs all out in 41.4 overs in return. Dharmendrasinh Jadeja from Saurashtra returned 10-6-10-7 in an outstanding display.

Talking about the career of Vyas, his results in the history of cricket were inspiring as he managed to beat the opponent team. In the last league match, his score was tremendous. It will help India to record a victory against the opponent team. Samarth Vyas proved his support, led his team from the front to emerge as the greatest run-maker and ended the tournament on a high. There is no doubt about it that T20 is a condensed cricket format.

In addition, England and the Wales Cricket Board introduced it at the professional level for the inter-county competition in 2003. When it comes to Vyas’s overall history in T20, he has played 11 T20 matches. With his amazing batting skills, he scores 164 runs; his average scorer innings is 18.22. Additionally, the 50s he scored in T20 was a memorable moment for the team.

At an international level, test cricket is a first-class commonly applied in domestic matches. The complete list of Vyas in the first class game is as follows. He is a part of 10 matches, in which he plays 10 innings. In addition to this, he is 1 time not out, scoring 271 runs. His highest score is 54 runs, not out. Moreover, he made two 50s with a strike rate of 53.24.

Many people needed to learn that Vyas is also a bowler. Samarth Vyas is not just a batter but also a good bowler. However, he has a special trick of bowling. In addition to this, he tricks into cutting off the opponent team. Regarding bowling history, he has been part of several test matches, ODI, T20I, and T20. Undeniably, his bowling was a crucial picture in Test matches.

The duo of Vyas and Desai took the opponent bowlers to the cleaners through the innings while playing a massive first-wicket partnership of 282 runs. However, the Saurashtra opener’s batters till the 37th over before Desai was caught. Samarth Vyas continued with his aggressive ways until Bishworjit Konthoujam outed him in the 45th over.